Did I say the man in specs in the previous post?
Wonder which man in specs it is....
Posted by THINKOPOTAMUS at 8:56:00 pm 3 comments: 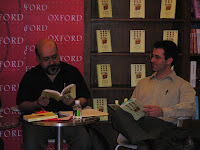 And The
Nonsense Continues
These are pictures taken at the Chennai launch of The Tenth Rasa: An Anthology of Indian Nonsense edited by Michael Heyman who's the merry man in specs listening to my reading..... 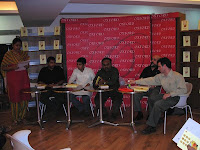 Date: January 7, 2007. Place: Oxford Book Store.
Click on the title to see the source of these pictures which were purloined at about 8. 10 p.m. Indian Standard Time to grace this page.
Posted by THINKOPOTAMUS at 8:15:00 pm 6 comments:

Poems On A String

I thought I'd post a few poems this time. They are
on my website, but this seemed a good enough time. 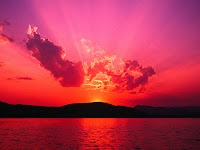 DUSK
when the sun dips as if forever,
when streaks of feeling
silver the horizon's brow
and the waves start up in excitement,
frothing and insatiable,
my thoughts betray me
and i can barely feel the world...

ART OF CYCLING
the red new bike, barely smaller than his eight year-old frame
totters in a straining arc of steel and young thigh,
the quick of possession has already settled to drudgery and fear,
and his rolling screams are repeating a pattern.
i can close my eyes and doodle away those days of sentiment
like fluorescent on virgin canvas.

my dreams are squeezed out in futile doses
let me pause and guide him on his way
and pat him for his speed, encourage him to take the curves
explain afresh the pleasures of dangerous riding
to race the steeps and dare the climb abetted by the wind.
there's no life in cruising, son, your father's hopes are done.
let's tell them no, the rules of championship aren't weakened yet:
on a summer's day, there's much to be said for a marathon.

(the bike too has grown, as you can see!)

all day we cry
without pain
and struggle to run
all day for the night--
let the cloud split
its gloomy swelling
and pour
for you've proved beyond doubt
rain cures. 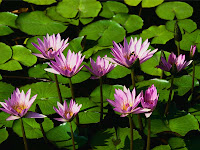 and, finally, one of the few poems I've written born of thoughts
from reading a newspaper report.
KUMARAKOM
(after the boat tragedy)
days after the drowning when companion villages
raised the memory of their various dead,
and boats and blame were re-examined,
and officials packed up, exhausted,
dredging out certificates and compensations;
one evening when the wails had stilled the sky
like ghost singers fading out, and the lamp
reached the threshold like any other evening,
the old woman hobbled out, muttering her prayers
and cursing each member of her family
for leaving her alone,
unaware of the reason
for the terrible silence in the house
that invaded even her deafness.
Posted by THINKOPOTAMUS at 11:26:00 pm 7 comments: 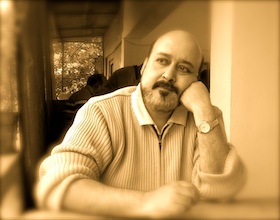